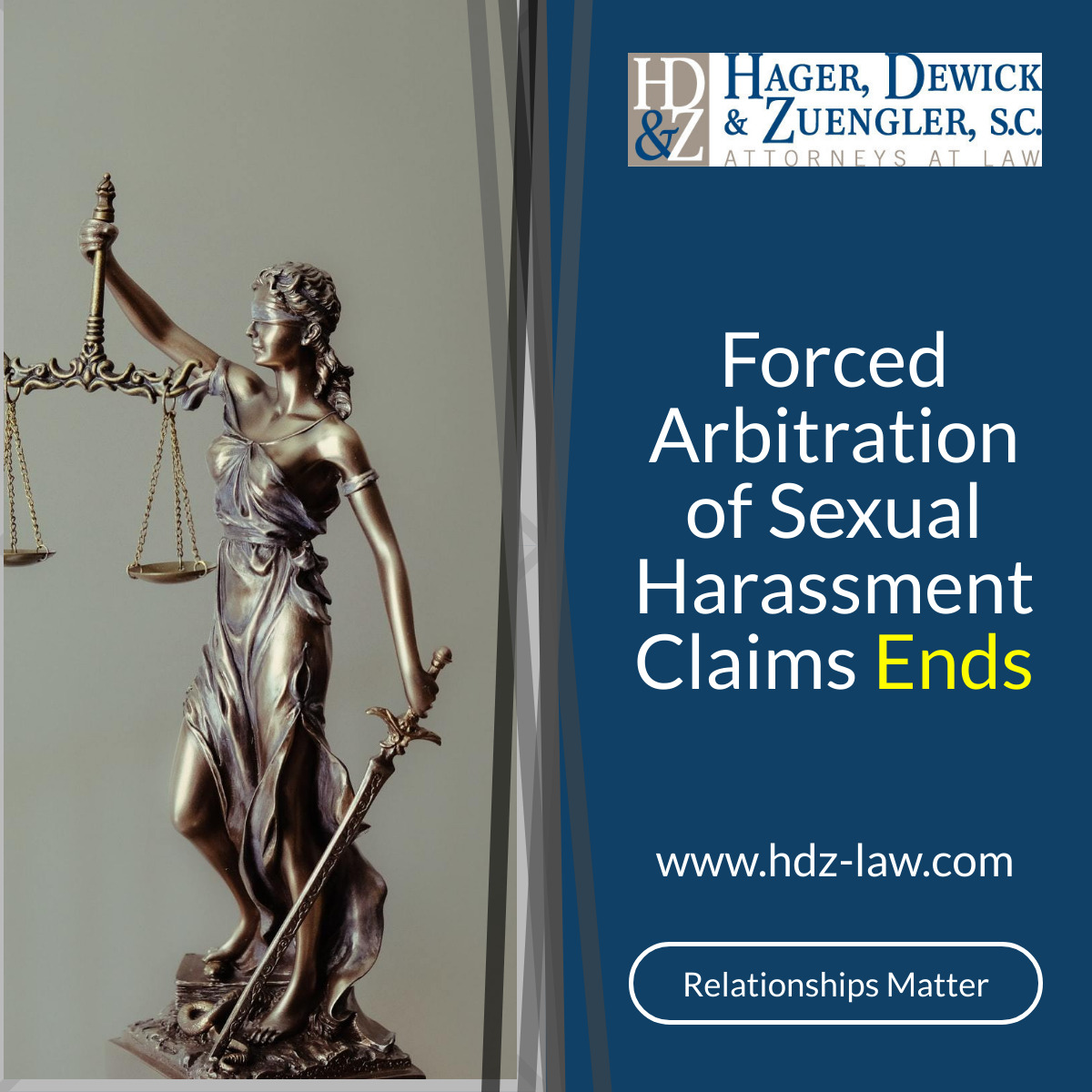 On March 3, 2022, President Biden signed the Ending Forced Arbitration of Sexual Assault and Sexual Harassment Act of 2021 (the “Act”) into law.   Both the House of Representatives and the Senate passed the Act in February in a rare showing of bipartisanship. The Act prohibits enforcement of contract provisions that mandate third-party arbitration of workplace sexual harassment or assault claims.  The Act was likely passed in a response to the #MeToo movement.

Many employers have implemented mandatory arbitration clauses in employee or other agreements that require both the employer and its employee to arbitrate most or all types of employment claims, including claims alleging sexual harassment.  As a result of the Act, employees will have the ability to render these mandatory arbitration clauses unenforceable as it relates to “sexual assault disputes” or “sexual harassment disputes”.

The Act defines “sexual assault dispute’ as a “dispute involving a nonconsensual sexual act or sexual contact.”  A “sexual harassment dispute” is defined as a dispute relating to any of the following conduct directed at an individual or group of individuals:  (1) unwelcomed sexual advances; (2) unwanted physical contact that is sexual in nature, including assault; (3) unwanted sexual attention, including unwanted sexual comments and propositions for sexual activity; (4) conditioning professional, educational, consumer, health care, or long-term care benefits on sexual activity; or (5) retaliation for rejecting unwanted sexual attention.

If a dispute arises as to whether a particular claim qualifies as a “sexual assault dispute” or “sexual harassment dispute, the Act provides that a court, not an arbitrator, is to resolve such dispute, even if there is a contractual term to the contrary.  The Act applies not only to federal claims under Title VII of the Civil Rights Act of 1964, but also to state and tribal law claims for sexual assault and/or harassment.  Employees can also avoid class, collective, or multi-plaintiff action waivers in connection with sexual assault and/or harassment disputes.

Notably, the Act will still permit employers to mandate arbitration related to employment claims related to discrimination, retaliation and wage and hour claims.  However, many employees will bring multiple, claims against their employer such as a claim for sexual harassment along with a derivative claim of discrimination or other employment-related claims.  Although courts have traditionally severed arbitrable claims from non-arbitrable claims under the Federal Arbitration Act in other circumstances, employees may look for ways to argue against such severance under the Act.  It is unclear at this time how courts would address these interrelated claims.  For instance, the sexual harassment claim could be litigated in court, but the discrimination claim could proceed in arbitration pursuant to a valid arbitration clause.  In this instance, employers would need to determine whether to permit all claims to proceed to court or whether to split the claims into two forums.  Alternatively, it could be determined that the sexual harassment claim, along with any other potentially unrelated claim be litigated in front of a court.

As a practical matter, the impact of the Act could have a seismic effect on employers.  While mandatory arbitration clauses ensured that employee disputes were resolved through private arbitration, the Act will now allow employees to litigate sexual assault and sexual harassment matters in public.  Employers may be confident that they will prevail in defending such claims, but will now need to analyze the risks between succeeding in their defense of the claim versus the adverse publicity it may receive going through a public trial.

Employers have made strides in preventing harassing behavior in the workplace but further preventative actions should always continue to be implemented.  Such efforts include providing anti-harassment trainings, communicating the importance of compliance amongst all employees, creating and ensuring a process to investigate credible allegations and promptly addressing any instances of harassment that may arise.  In addition, employers should work with counsel to ensure that employment documents referencing arbitration of these claims reflect the Act.