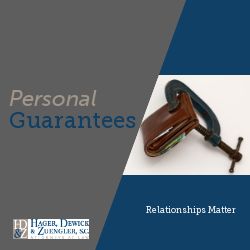 Personal Guaranties:  Are They What You Think They Are?

In conclusion, personal guaranties are often not what the guarantor may think they are and when multiple parties guarantee a loan or other obligation, executing a Contribution Agreement may be a wise decision, particularly since many guarantors are under the misguided understanding that they will only be responsible for their share of the indebtedness based on their proportionate ownership interest in the business.